The most iconic Batman villain. Who is he? What makes him so dangerous and one of the most feared villains in all of comics? 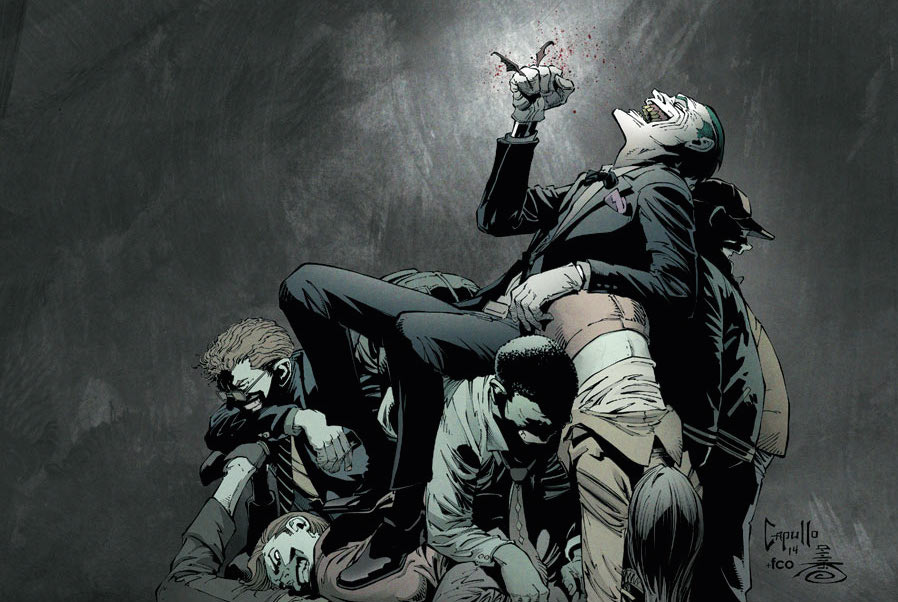 The Joker is a super villain created by Jerry Robinson and Bill Finger (with Bob Kane also playing a role). He appeared in Batman #1 in 1940.

In most (but not all) interpretations, The Joker generally dresses up like a clown, with his skin bleached permanently white, has green colored hair, long extended lips (in some interpretations due to makeup) which are red in color, and has a menacing, creepy, teethy smile. He is known to have no regard for human life or any material possesions.

Despite not been physically strong or having any extensive combat experience, he is known to be one of the most dangerous villains in comic books. 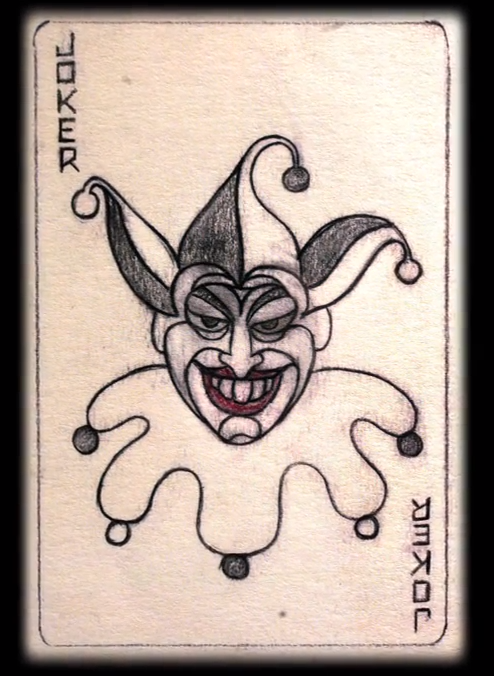 The first sketch of The Joker Jerry Robinson based on the deck of cards he had with him.

The Joker was conceived at the time of writing Batman's first issue in the early 1940s. Jerry Robinson was a teenager who was studying creative writing at Columbia University, and started working part-time as a ghost artist for Bob Kane. Bill Finger was the main writer involved, as he was facing writing a total of six stories (most for Batman #1). Since Finger wasn't the kind of writer who would quickly churn out a lot of stories in short amount of time, Robinson volounteered to write one story to ease his work-load.

During his creative writing classes at Columbia, he was taught that some characters are defined by their contradictions. Robinson found villains to be more interesting characters, and wanted an arch-nemesis to Batman. He thought about someone using jokes to do inherintely violent things as a good contradiction, and the word Joker came to him. He encountered a joker playing card at this house.

He showed Bill Finger a rought sketch he made and talked to him about the concept based on that for a possible villain. Finger said it reminded him of Conrad Veidlt's role in the movie The Man Who Laughs. Finger and Robinson worked together to refine the character. Right from the start, The Joker was sketched as a murdering madman who had a twisted sense of humour, and who loved to laugh and mock. Finger added Joker's perma-white and famous grin.

As with Batman, the question of who came up with the Joker is disuputed. Jerry Robinson claimed that he came up with the concept, with Bill Finger taking the concept and adding some improvements and Kane doing the artwork. Bob Kane categorically refused this version and claimed it was him and Finger who created the character.

Most people credit Jerry Robinson and Bill Finger for the Joker, with Kane adding small support in the creation for it.

Below you can watch an video of Jerry Robinson himself talking about the time when he helped create the Joker.

The Joker over the years

The Joker initially started as a murdering psychotic who killed people for his own pleasure. He liked to announce his intentions to commit a crime and wanted to see if someone could stop him. Initially he was supposed to die (Bill Finger was concerned that him getting away again might make look Batman incompetant), and that was how he was written in his second appearence in Batman #1, until Fredrick Whitney Elsworth made a last minute edit to the comic and hastiliy drew a strip to hint to the possiblity of him returning in the future.

In the 1950s, as the Comics Code Authority guidelines took effect, his character moved away from his dark roots and become more and more a prankster than a killer. Since he couldn't really kill, his motivation became more materialistic and various stories revolved around him trying to steal or extort money, gold or jewels. Though generally considered one of the worst periods for the character, it did have the fortunate side-effect of introducing some of the things now considered charactteristic of The Joker - Hand Buzzers which he used when tricking people into a handshake, trick guns, flowers which squirted acid and other similar things.

Concerned about declining sales over the years, finally in the early 1970s, the character was revived and went back to it's roots as a murdering psychopath by writer Dennis O'Neal in the story The Joker's Five-Way Revenge. Shorty after, The Joker became the first comic villain to be given its own comic 'The Joker'. Since we was a villain, every comic still required him to be punished in the end. Obviously, the comic did not run for a long time, because who wants to buy a comic where the main character always loses.

Then came the eighties, which ushered in the modern age for comics. It was a time of great experimentation, especially for DC Comics, and this affected The Joker as well. He became more psychotic, had better stories, and made an undelible impact on the lives of the two men in Gotham who challenge him the most.

The Modern Age: Its more personal

Major spoilers ahead, so proceed with caution. The stories discussed in this section include The Killing Joke, No Man's Land, A Death in the Family and Endgame

The Joker progressed into commiting more psychotic and lunatic murders and other crimes. Writers were encouraged to explore the depths of his twisted and dark lunacy, which left a deep impact on Batman stories. This period has also involved him leaving an undelible impact on the lives of Batman and Commisioner Gordon.

Alan Moore's landmark story, The Killing Joke is a prime example of who The Joker has come to be in comics. Regarding as one of the most important stories in comics, this one-shot run explors his character and revisits his origin story as a failed stand-up comedian who gets sucked into working for the Red Hood Gang, ultimately falling into a vat of chemicals. This incident serves as a straw which breaks the camel's back and he snaps into madness.

Cutting to the present, The Joker goes on to shoot Barbara Gordon (Gordon's Daughter), paralysing her, and clicking deeply innapropriate photographs of her and forces Gordon to watch it, in order to snap Gordon into madness (in order to prove to Batman that all it takes is 'One Bad Day' to make anyone switch from normalcy to lunacy). The Joker underestimates the strength of character of Gordon who, though deeply distraught, still doens't crack and disproves Joker's point. This comic also ultimately resulted in the creation of the character of Oracle, as Barbara was paralysed and couldn't continue as Batgirl.

Later in the year, another story, A Death in the Family, shows The Joker clubbing Jason Todd (the second robin) with a tire iron, and ultimately killing him along with his mother. This had a deep impact on further continuity, with Jason Todd returning as The Red Hood years later.

In No Man's Land, The Joker kills Gordon's second wife, Sarah Essen. In the run titled Endgame, The Joker poison's all of Batman's allies in the Justice League, and later goes on to chop off Alfred's right hand.

Part of why many poeople consider him to be Batman's greatest enemy is because of the enormous personal harm he has done to Batman and his friends. Nobody comes close in that regard (except Joe Chill).