Written by Frank Miller and with art by David Mazzucchelli and with Dennis O'Neal as Editor, this series helps define Bruce Wayne's early journey to become the Dark Knight, while also telling the story of James Gordon and how they both begin to trust each other. 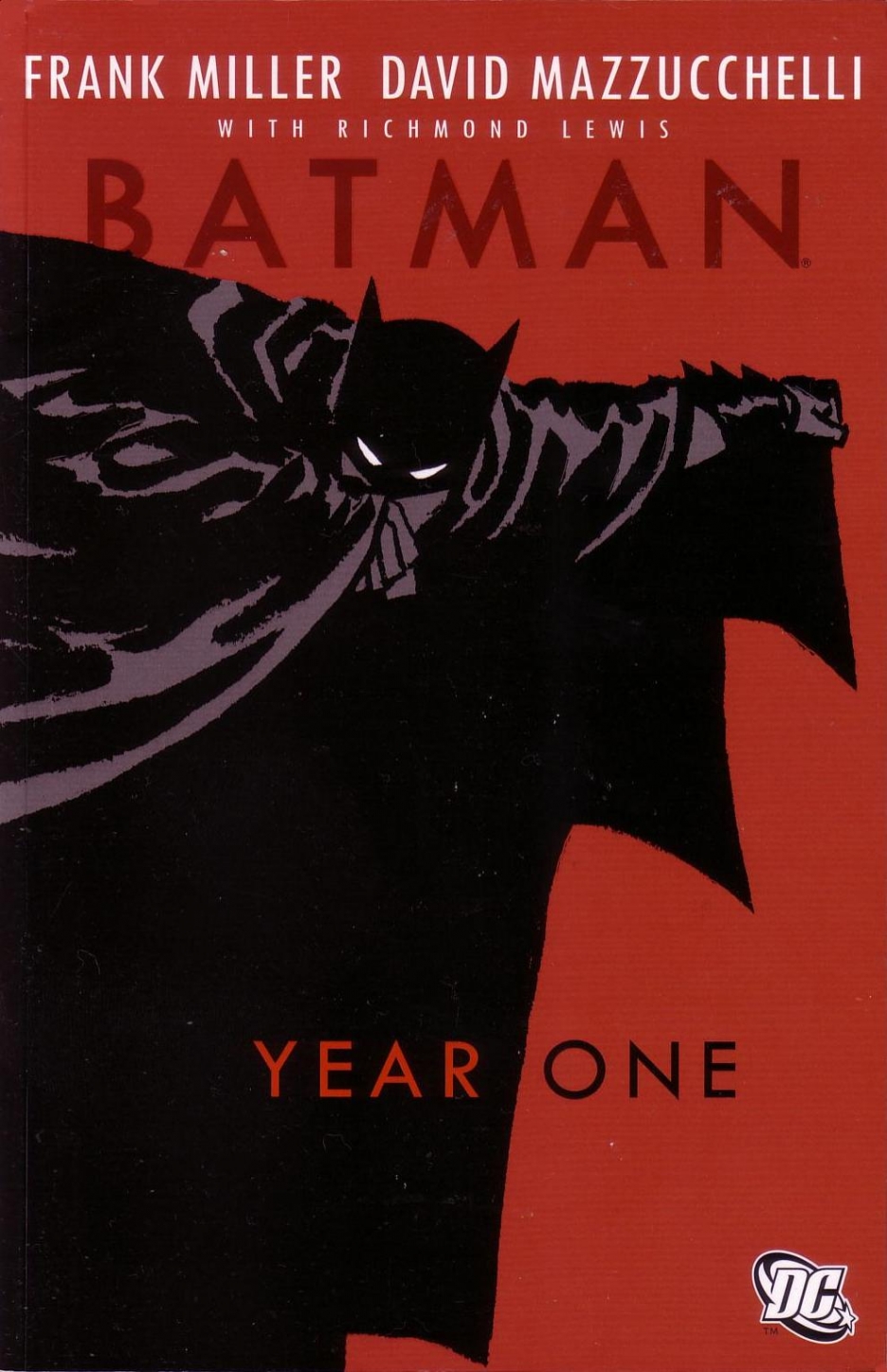 The story arc was written by Frank Miller, and has artwork by David Mazzucchelli. It appeared as issues #404 to #407 in the flagship Batman comic in 1987. The story was also made into an animated movie in 2011. It also had a major impact in the 2005 movie Batman Begins. It is one of the most influential Batman stories to date.

The story begins with the arrival of both James Gordon as well as Bruce Wayne to Gotham City. Gordon is transferred from Chicago. His wife is pregnant with their first child. Bruce Wayne has returned after twelve years abroad, where he learned science, manhunting and martial arts.

Gordon quickly gets to see the corruption in Gotham, especially as he is paried with a highly corrupt policeman as a partner - Detective Arnold Flass. Flass tries to get him to play ball with the corrupt practices in the GCPD, and even gets him to meet commissioner Loeb, which is also highly corrupt. When it is clear that Gordon will not play ball, and will not be corrupt, Flass gangs up with a few of his colleagues and beats up Gordon as a warning. Even though the people were wearing masks, Gordon figures that they were Flass and his friends as he could recognize one the person's laughter as being distinctly Flass'. They assailants remind Gordon that he has a pregnant wife as a threat.

Meanwhile, Bruce goes to a seedy area of Gotham to check out how bad things are, where he gets approached by a young prostitute. His pimp comes up and scolds her and proceeds to beat her (Telling her to look better for potential customers and to waste time on people who are not interested). Bruce tells the pimp to stop, which escalates into an altercation. The prostitute stabs Bruce in the leg, and a young Selina Kyle (also a prostitute) intervenes and fights Bruce too. Bruce recognizes that she has karate training but easily defeats her. The police arrive at the scene and shoot Bruce and proceed to take him in the car, where they are discussing whether to take bruce to the hospital or not. Bruce manages to swerve the car into a crash. He rescues the policemen and then proceeds to escape.

Gordon follows Flass and his friends, and waits outside. Once he finds Flass leaving, he follows him and makes him crash his car. He then proceeds to beat him down, in one of the most badass moments in Batman comics. He beats him just enough not to require hospitalization. He then strips him naked, handcuffs him and leaves him on the forest overnight. He knows Flass would never report it, He realizes that he'll need a much more tough approach to fight the corruption in the city, which sometimes might require means many would find unconventional or even slightly outside the law itself.

An injured Bruce is shown in his living room, looking at a bust of Thomas Wayne. He is desperate for inspiration, when a Bat flies in by breaking one of the living room windows and sits on the bust. Bruce takes this as a sign, and vows to 'become a bat'.

Gordon, meanwhile, is getting more and more fame for his upstanding ways, even from the press. In light of this, pressure has gone right up to the mayor to remove him from the police force, but the mayor doesn't as Gordon has the press on his side, making it a politically bad move to do so. Bruce is shown donning the Batman costume and fighting criminals, but obviously being inexperienced, makes a mess of it, almost killing a criminal and injuring himself badly in the process.

Over the next few weeks, more and more of such cases of the Batman assaulting criminals are heard, and the GCPD is now involved in stopping him. Gordon deduces that he operates between midnight and 4 A.M, and that he's working his way up the levels of crime, initially fighting low level street thugs and now moving upper to more established criminals, and will target corrupt policemen if they get in his way too. Batman crashes a party where Commisioner Loeb and Falcon where discussing the Batman situation. Batman gives them all a warning that none of them are safe anymore.

A few days later, Batman ends up tieing Falcone naked (much like Gordon did to flass), and dumps his Rolls-Royce in the river. Gordon seems to have a sneaking suspicion that District Attorney Harvey Dent and questions him about his activities on certain dates and times. It is then revealed that Dent has been working with Batman. Later, Sarah Essen and Gordon happen to chance upon Batman (when he was trying to save an old lady's life). Batman manages to escape from Essen and flees to a nearby building. Gordon tries to cover the building, but at the same time hold back, but Commisioner Loeb orders air support to bomb the roof of the building.

Loeb then orders the swat team in the building, wanting Batman dead. Batman, in one of the most famous set peices, pushes a button which activates a signal for all bats in the batcave to come rushing in the building, attacking the swat team. Meanwhile Batman proceeds to beat some of the swat team, and then escapes. By now Gordon has moved his prime suspect in the Batman case from Dent to Bruce Wayne. Essen even says that Bruce could hire impersonators, and have casts on his leg to cover the bullet wounds he recieved in the building attack. Meanwhile, Gordon and Essen's relationship grows deeper and they end up beginning their affair. Inspired by Batman, Selina Kyle also makes a costume modeled after a cat.

Batman intimidates a mobster into giving information implicating Flass and Loeb in illegal activities. Loeb calls gordon and then intimidates to play ball, showing him pictures of his affair with Sarah Essen. Later, Gordon questions Bruce Wayne (who puts on an act of a vapid playboy). He later also confesses to his wife about his affair with Essen. Later on Barbara Gordon gets a phonecall about the affair, but she tells them she already knows about it and not to call her again. Later in the story, she delivers a baby boy.

Loeb is keeping tabs on Gordon and knows when he's leaving house. When he does, Loeb orders Falcone's men to kidnap his baby son. Gordon, while going on an errand, spots a motorcycle goe past and enter his garage. Gordon follows him, where he sees his son being kidnapped by Falcone's men. The man on the motorcycle was Bruce Wayne. In the heat of the moment, he loses the motorcyle and Gordon uses it to chase the kidnappers. Bruce Wayne is cornered by Barbara Gordon, but Bruce (while hiding his face) tells her that he won't let anything happen to her son and runs out in pursuit.

Gordon shoots out the tyres of the car carrying the kidnappers and his son, while they were on a brudge. This causes the car to crash. One of Falcone's men (Falcone's nephew, Johnny Vitti) fights with Gordon (Gordon loses his glasses in the process), and in the struggle they both fall over the bridge, along with Gordon's son. Bruce also jumps over the brudge and ends up saving the baby. Bruce hands over the baby to Gordon, and stands there in front of Gordon unmasked. Gordon thanked him, and said that he's practically blind without his glasses, and asks him to leave before the police arrives.

Harvey prosecuted Flass in court, and flass talked about his corrupt dealing with Commissioner Loeb. Loeb resigns, but the mob already has a replacement candidate to serve as his replacement. Sarah Essen moves to New York. Gordon and his wife are going to marriage counselling, and he is promoted to Captain. Meanwhile, it is mentioned that someone calling himself the Joker is threatening to poison the water supply. In the last panel, it is implied that Gordon is now working with Batman to counter this threat, signaling the start of Gordon and Batman's alliance.

More to note on the story

The art in the graphic novel was typical of the mid-1980s - however artist David Mazzucchelli just adds a bit extra to push this into an iconic depection. A major reason why this story seems cinematic is because of the artwork, in particular the framing of some of the panel shots.

This story in particular, was about exposing the grime underneath Gotham, and Mazzucchelli's artwork works perfectly to make the characters and the city in general, dirty, grimy and seedy. 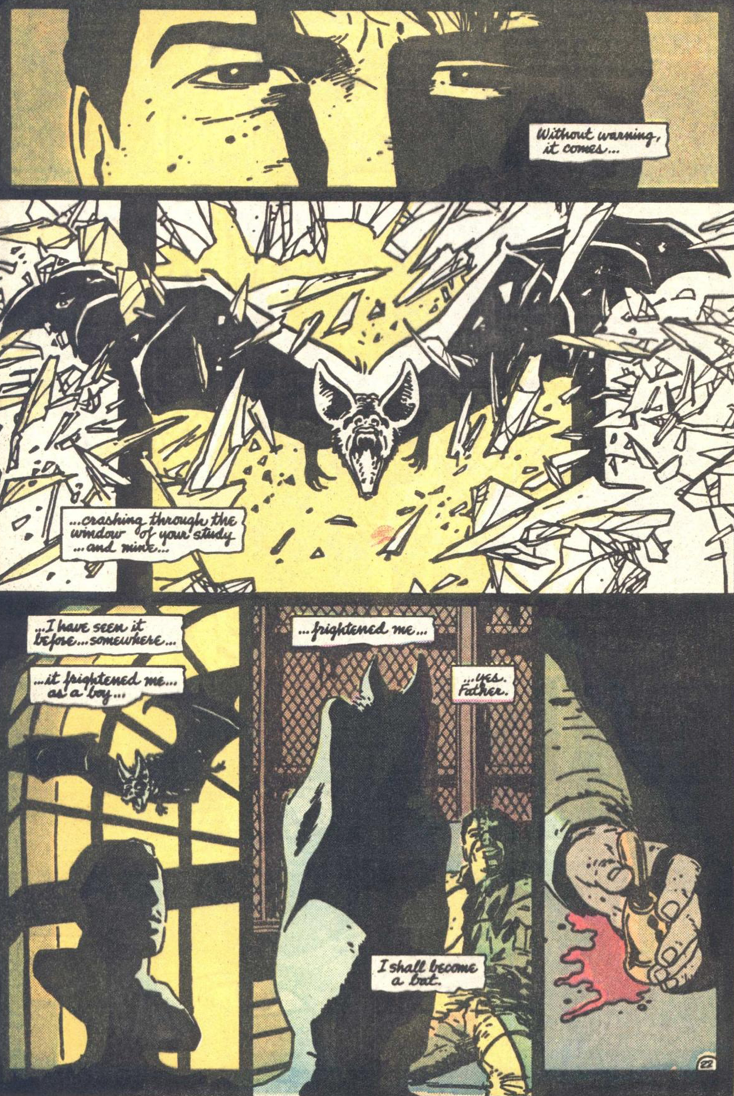 Notice the smart and excellent use of shadows in this famous page. 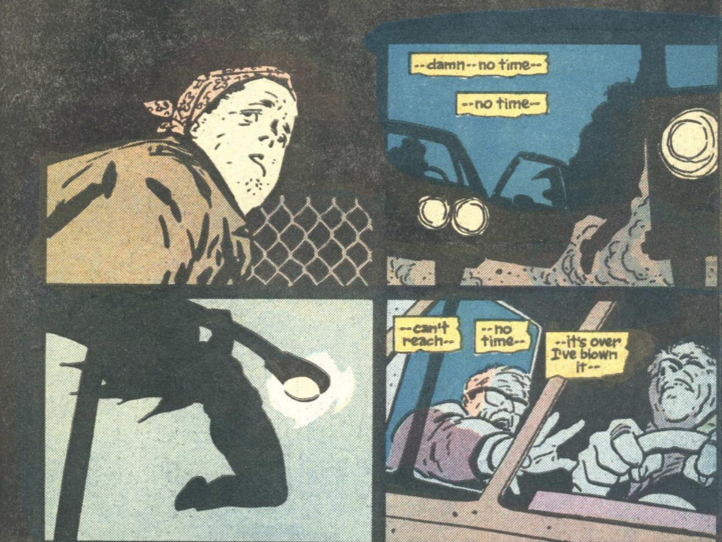 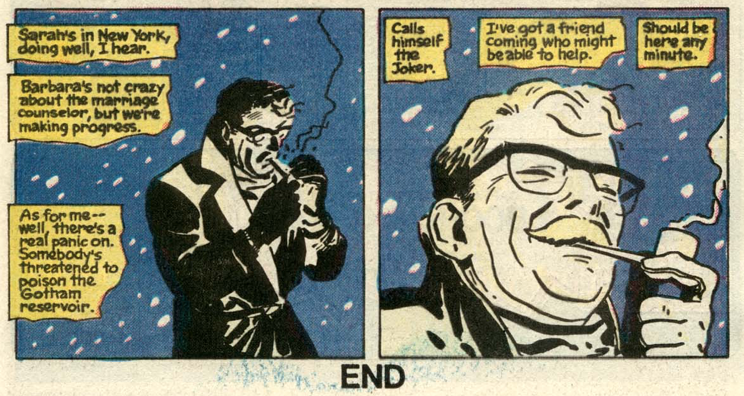 The artwork adds to the noir-style tone of the story.

David Mazzucchelli also worked a lot with silhouettes and employed smart use of shadows and darkness in his frames. You could also see that in some action scenes, who would draw a few panels from the perspective of the main character (either gordon or batman), further taking us in to their world and point of view.

His artwork is more abstract by design, and his economy of strokes in certain characters and panels just needs to be appreciated and praised.

Frank Miller pulled out all the tropes when it came to film-noir, making it a highly engaging read. This book is as much Gordon's story as Batman's (in fact, I would probably lean more on gordon's side). He really did a great job is portraying Gordon as a badass. It is a difficult job to portray somoene whom the audience could root for, identity with, but still have flaws and make mistakes. Miller really added depth to Gordon, and his take on the character had a major effect on how Gordon is portrayed ever since.

It's also great that Miller added a lot of depth to Bruce Wayne. Its all but natural to think that Batman, being just a man, would make some mistakes and struggle in his initial days. Its also very natural to think that a person like Gordon would not immediately think highly of a masked vigilante, and that Batman would need to earn Gordon's trust. This story portrayed the forging of this alliance perfectly.

How influential was Year One?

Year One has ended up being one of the most influential stories in the history of Batman. The Man Who Laughs - one of the most famous joker stories, picks up from where Year One leaves. The story also had a major influence on the 2005 film Batman Begins as well as its 2008 sequel The Dark Knight. The 2013 video game Batman: Arkham Origins was majorly influenced by Year One too, as Arkham Origins also retold the story of a very new Batman, with Jim Gordon not trusting Batman and trying to arrest him (at first, at least).

It's not only one of the most important comics ever written, it's also among the best.