The Joker incapacitates and brainwashes the justice league with his Joker toxin, and is now coming to destroy Gotham and everything Batman vowed to defend, including Batman himself.

Major Spoilers ahead. Be warned! 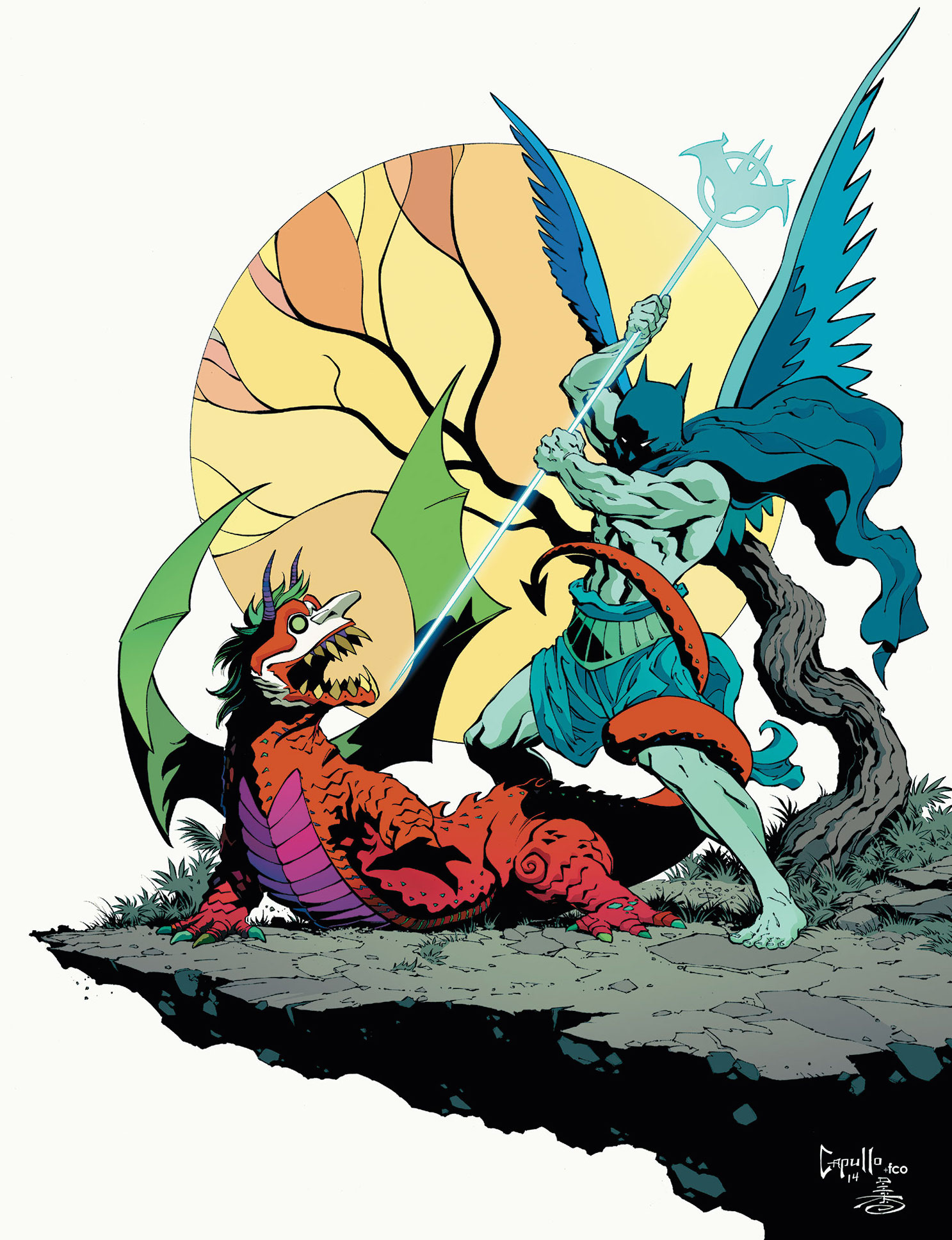 The story starts with Batman recovering from a battle involving Scarecrow and in a new base seized from the Court of Owls. He's suddenly attacked by the rest of the founding members of the justice league. Bruce immediately enacts plan "fenrir" in action, which involves a large mech-suit (some fans are calling it the Justice-Buster Suit) to counter the justice league members. He manages to subdue Wonder Woman by invoking a relic called the Bind of Viels which tricks her into believing she's killed him and putting her in a motionless state. Batman studies Flash's movements and puts a special frictionless liquid on the road which leads to Flash crashing, and manages to coat Aquaman with a special foam-type gel which sucks all the moisture from him the more he tries to move. 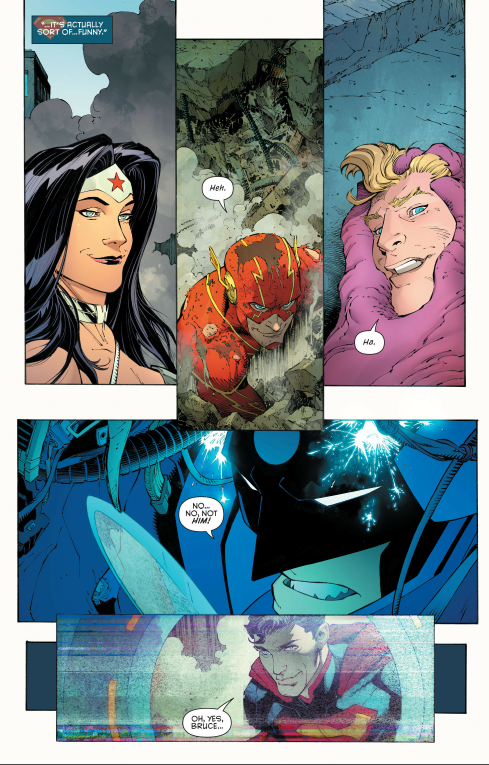 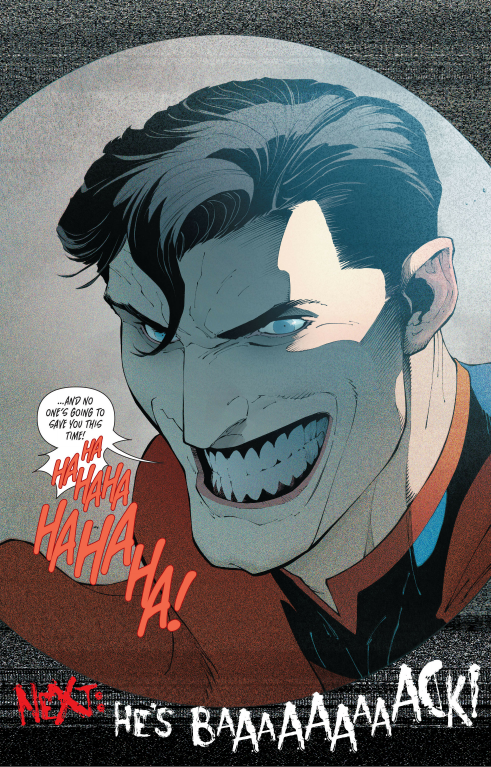 Then Superman comes in and shows that he's infected with the Joker toxin too. After a big struggle, Superman and Batman are face to face. Batman reveals that he has a kryptonite laced chewing gum in his cowl at all times, and spits into Superman's face. 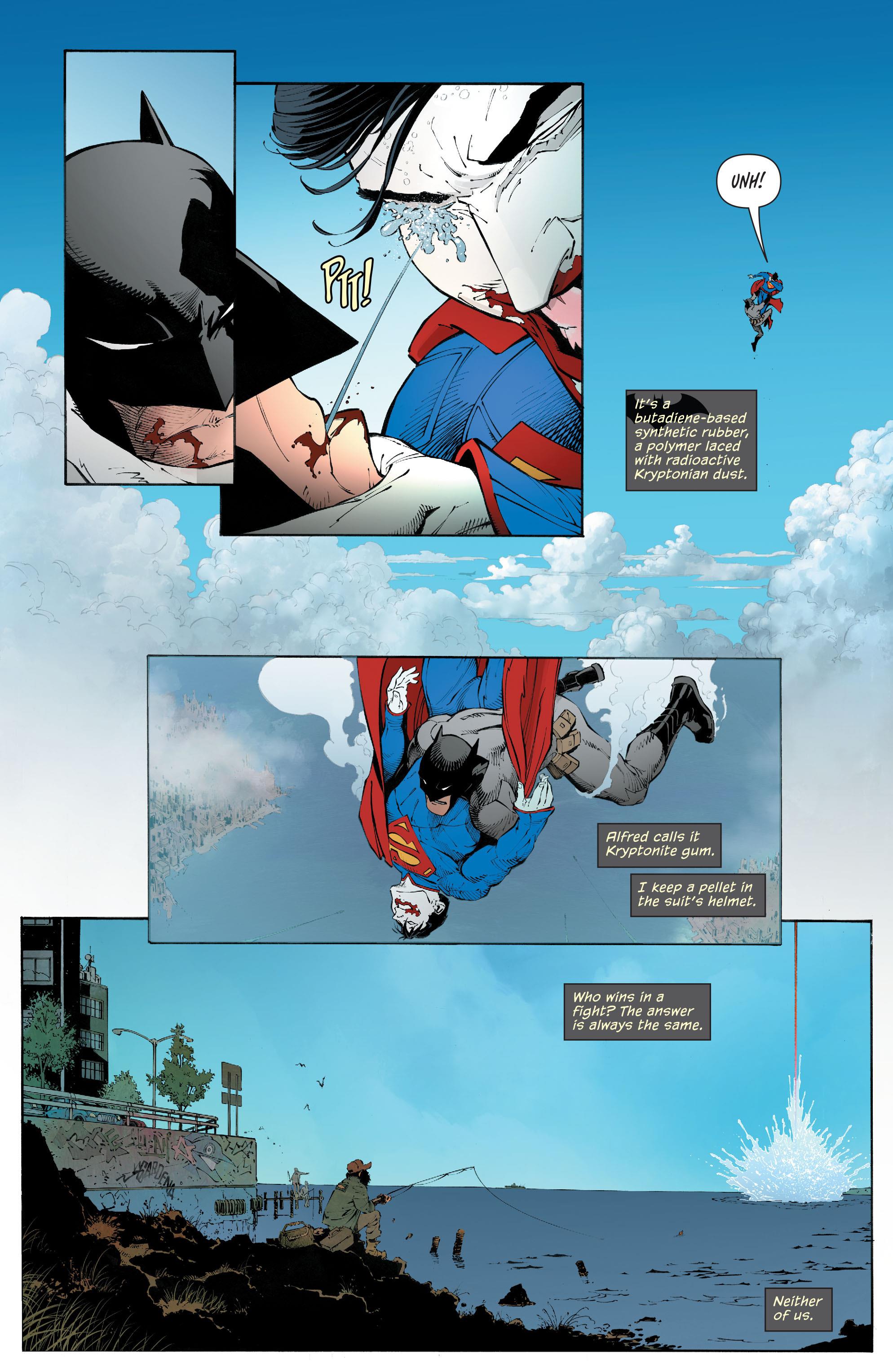 After subduing Superman, Batman goes to Arkham Asylum where he meets Eric Border, an orderly working there. Border says that he's seen Batman and has no hopes for him to be helped anymore. He locks batman in Joker's cell, and then reveals himself to be the Joker, using muscle relaxants and make-up to hide his real appearance all along.

The Joker begins the next phase of his plan, which is to cause true havoc and harm to the one thing Batman loves the most - Gotham City. He spreads an incurable pathogen through the air, which turns infected people into people similar to joker in appearance, and blindly attack people they love. Meanwhile Batman learns that the Joker knows that Batman's real identity and his whole history. Things become more complicated when it comes to notice by Gordon that Joker was there in hospital photographs throughout many important historical events, decades before Batman even existed. Gordon is attacked by the Joker, and while Gordon shoots him dead, it is revealed that the Joker still recovers and severely injures Gordon with an axe to his chest, also infecting him with the toxin. Gordon is hospitalized.

Batman comes to the conclusion that Joker is probably using a serum to heal him from damage, and giving the city the exact opposite of that serum via the airborne pathogen. More images surface of the Joker being there in the background in many more historical photographs in Gotham, leading more credence to the fact of him being an immortal. Desperate for information, Batman confronts the Court of Owls, who don't give him much information, but Batman is attacked by a Talon (the oldest one, Uriah Boone). Batman asks himself about the "pale man" and whether it is true that he is also immortal. Meanwhile, The Joker swims in deep to find an entrance to the Batcave, where Alfred confronts him and almost shoots him dead with a shotgun, damaging the right side of his face and his ear. The joker hides and reveals that he's done more research on Alfred, and how he is Batman's Right-hand man - and then proceeds to cut off Alfred's right hand, and steal's most of the trophies in the Batcave. 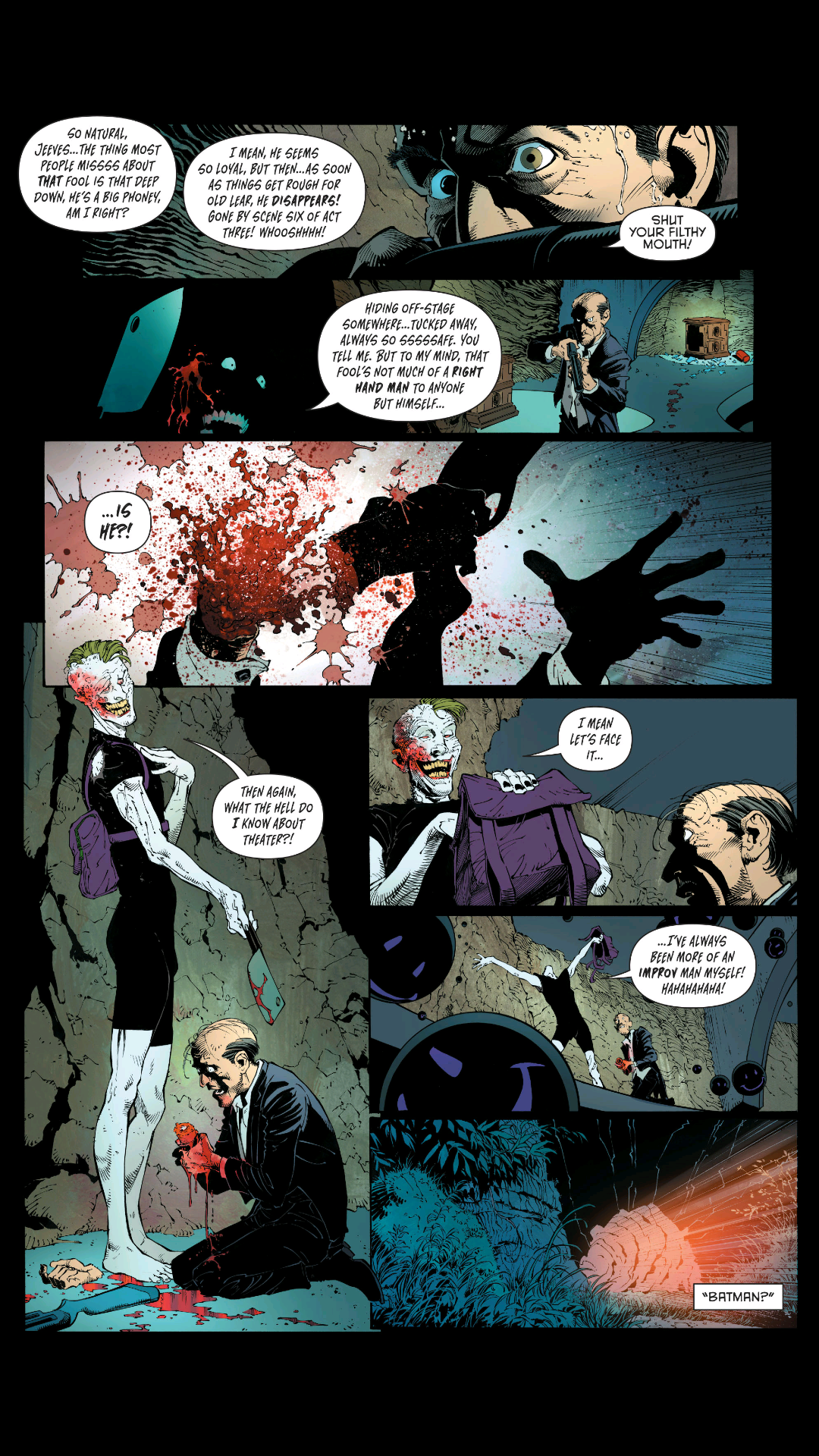 He puts those in a sort of macabre parade in Gotham. Batman meanwhile is truly desperate and calls on his allies (Nightwing, Jason Todd, Batgirl, Robin) as well as his foes (Penguin, Posion Ivy, Bane, Clayface, Killer Croc) to come together to fight Joker, otherwise they all die. An uneasy alliance is formed and they make a plan to distract the hordes of infected citizens enough to make one final push for Batman to get close to Joker and take the serum out of his spine.

Batman gets on the float with Joker and battles him a bit, before Joker pushes out more gas and incapacitates all the allies and seemingly Batman himself. However, it is revealed that Dick Grayson was posing as Batman as a distraction, while Bruce was searching in the caves beneath the Bat cave where Joker would have fallen after his stint in Death of the Family. He manages to find it, which is a pool of a liquid called Dionesium, an extremely rare liquid which Joker took to regenerate himself from damage.

The joker attacks him there too, and a bloody combat is about to ensue. The joker had rigged the place with explosives and triggers it. The joker manages to stab Batman multiple times, whereas Batman manages to beat up him up quite a lot and even bites his ear off. As a last ditch attempt, Batman rams himself into the Joker, stabbing him with the Bat-Ears on his cowl. Both lie in a pool of blood. The joker recovers a bit and as he is about to stab the Batman one final time, a stalactite falls down on him injuring him in the spine (presumably paralyzing him from the waist down, him being unable to walk). As he crawls to the dionesium to heal himself, he is stopped by Batman. He reveals that he already gave his foes and allies a small amount of dionesium to heal themselves, and the rest is going to the city as a cure. They both lie there, while the walls and ceilings keeps exploding, leading to the presumable death of both.

Julia talks to Alfred about a note Bruce had sent her. Alfred reads it, and explains that Bruce always chose not to go for immortality, preferring mortality and facing it head on. This is something the joker never understood, that Batman chose to live just in the time he had. The note Bruce sent, just had the word 'HA.' written on it, implying this spirit, as well as the fact that Bruce got the last laugh over the Joker.

Some points to notice

To understand Endgame, we need to put it in context first. During Death of the Family, the Joker's whole angle was about his love for Bruce as a sort of friend. He viewed his allies are people making him soft, and that he is the true person who will make Batman stronger and better.

Endgame is about hate. When Joker fell down that cliff at the end of Death of the Family, he vowed to just finish off Batman and his city.

... I knew that that one was based around this idea of comedy and a happy ending and love. This one would have to be the opposite. There needed to be another one that would conclude on a much bigger scale ...

The story ends with a shot of the Duex-Ex-Machina referenced earlier in the story, and it being thrown away in the garbage. A Deux-ex-machina is often used as a plot device to serve as a magical or sudden thing which saves the protagonist, often when the writer has dug himself/herself in a hole. The reason why it was shown the way it was in the last panel was to show that in this story, there was no magical savior, no Duex-Ex-Machina which would save him. He really did die, and he bravely faced his own mortality in the spirit of sacrifice for the city, even when he had the opportunity to make himself immortal. He faced his fears, looked in the void and smiled.

Snyder said it as such as well.

... To see the harness in the garbage at the end is a way of saying -- in my mind, it couples with what Batman says in his note at the very end of the story. It's saying, "Don't be afraid of life being meaningless. Don't look at the void and say to yourself, 'No, I can't do it.' Don't wait for some divine intervention or sign. Instead, go out and make your life matter." ...

Apart from the amazing writing, there was also the fantastic artwork by Greg Cappullo. Just a few to notice are the following: 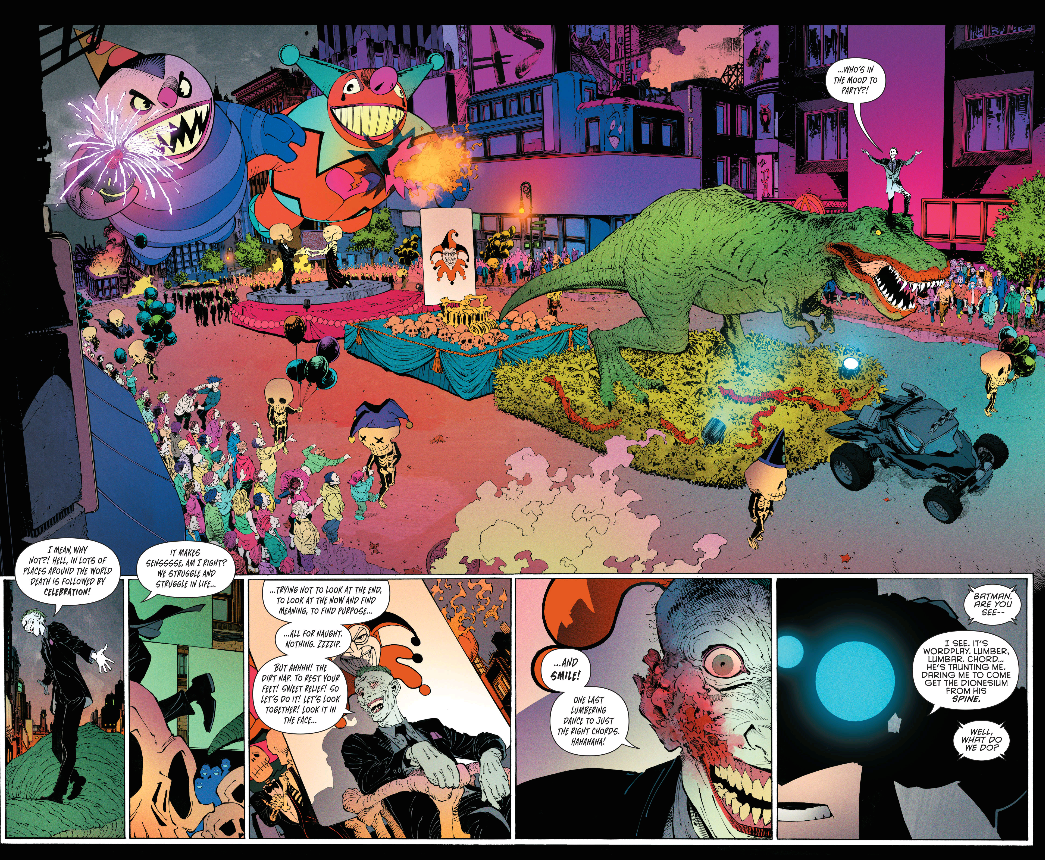 The float during the parade, an homage to the 1989 Batman film where Jack Nicholson's Joker does the same thing. 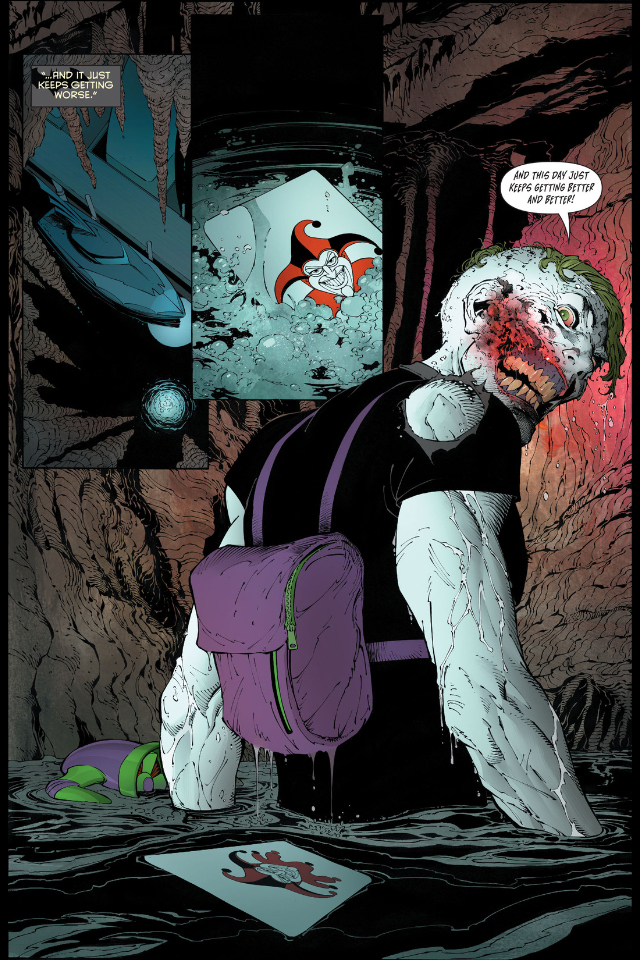 The design of the card is based on Jerry Robinson's original concept sketch of the Joker.

The way the cut on Batman's back goes, along with the placement of the knives, makes a smiley face.

The card in Batman's eye is a throwback to their previous epic confrontation in the The Dark Knight Returns storyline, in which the Joker gets a batarang in his eye.

The pool of blood forms the shape of a twisted or broken heart, symbolizing the strange relationship the two had.

The story has a bunch of great moments, right from Bruce fighting the justice league, to all the several reveals, or all the little touches and homages that Greg Capullo puts in there. Its all amazing. Due credit should also be given to Danny Miki and FCO Pascencia for the brilliant color work. It was very reminiscent of Zero Year which also had some of the best color work in Batman comics.

Endgame will go down as one of the classics and will probably have a very big impact on future Batman comics. We all know that Bruce will not really retire, and that he will go down fighting till his last breath. This story shows how, fighting till the end to save the city and fighting his greatest nemesis and a battle which is bloody and idealogical at the same time.