One of the most underrated villains of Batman, the scarecrow is now finally getting his due with the Nolan films and the Arkham Games

Most of Batman's biggest villains are reflections of parts of his personality. The ability to induce fear is central to Batman, and Dr. Jonathan Crane, or The Scarecrow is a former professor with an obsession with fear. Let's look at this fascinating character, and all the scarecrow has done throughout the years, and what all he still might do! 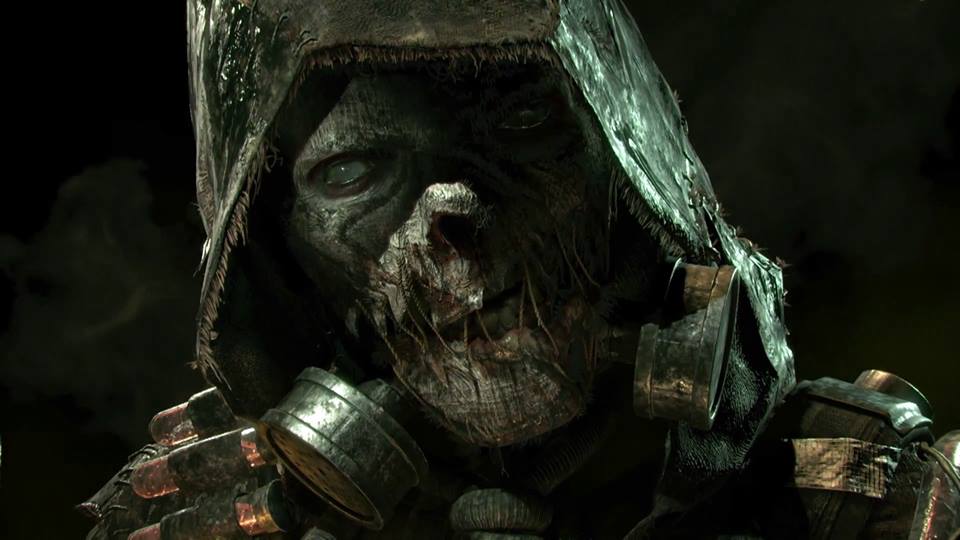 The Scarecrow's real name is Dr. Jonathan Crane. He is a former professor of Psychology at Gotham University, and has had a lifelong obsession with the emotion of fear.

The Scarecrow is extremely intelligent, often making well planned and meticulous plots to achieve his aims. His signature weapon is his fear-toxin, which he uses to cause nightmarish hallucinations on his victims.

Scarecrow was created by Bill Finger and Bob Kane and made it's debut in 1941 as part of the Word's Finest #3 - “The Riddle of the Human Scarecrow”, where Dr. Crane was introduced as a professor of Psychology in Gotham University. Since the year was 1941, it could be that it was actually Jerry Robinson who did the artwork (as a Ghost Artist) rather than Bob Kane.

Right from childhood, he grew up enjoying frightening birds. He grew up in a poor family and was fascinated with the emotion of fear, and became obsessed to study it further, and to further analyze and experiment on it. Crane is one of the few villains whose backstory was shown in a Batman story in the Golden Age. This added further depth to the character right from his debut itself. 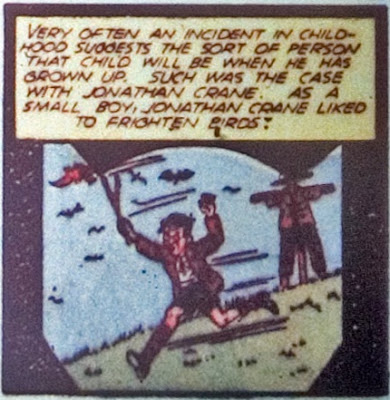 A panel from his debut in 1941. Jonathan Crane liked to scare birds right when he was a child. 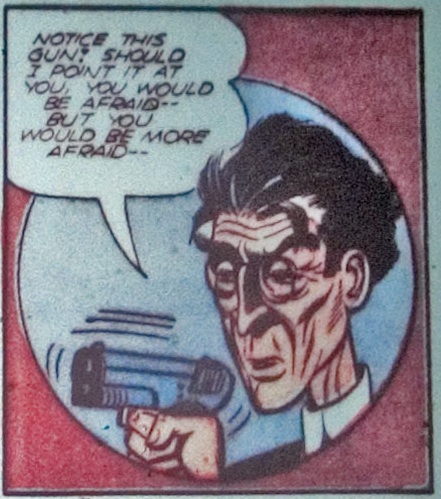 A panel from his debut in 1941. Crane uses a gun instead of using the fear toxin. His use of fear toxin comes in later years. 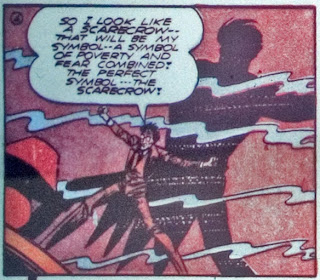 A panel from his debut in 1941. This moment shows why Crane chose the scarecrow symbol.

One time, to teach his students about a particular point, he fired a gun inside a packed classroom. His colleagues ridicule him for his unkempt clothes and lanky frame. Since he was not rich, he could not afford good clothes. He decided to teach society a lesson and assume the form of a scarecrow to do it. To him, the scarecrow is a symbol of both poverty and fear, both things he associated with himself. He also dressed up in a scarecrow outfit and terrorized people into doing whatever he wanted them to. Later on, he gets fired from the university, and scarecrow does more crime in Gotham for money.

Ultimately, Batman deduces that Crane is indeed the Scarecrow and hatches a plan to catch him, ultimately putting him behind bars.

In Batman: Scarecrow Year One, his origin was changed a bit and it focussed more on his childhood and teenage years too. In this story, Jonathan Crane was raised by his violent and extremely religious great-grandmother, and was very strict throughout his childhood. She never allowed him to have any friends and to read any literature (apart from religious texts) and used to punish him by putting locking him in a chapel all night where crows used to attack him (her grandmother used to soak the suit in dead rat juices, some wild fowl pheromones and some herbs which made the crows wildly and hungrily attack whatever thing carried that scent).

He was frequently bullied as a child too, and was called names like 'handrail' and 'scarecrow' because of his lanky frame. 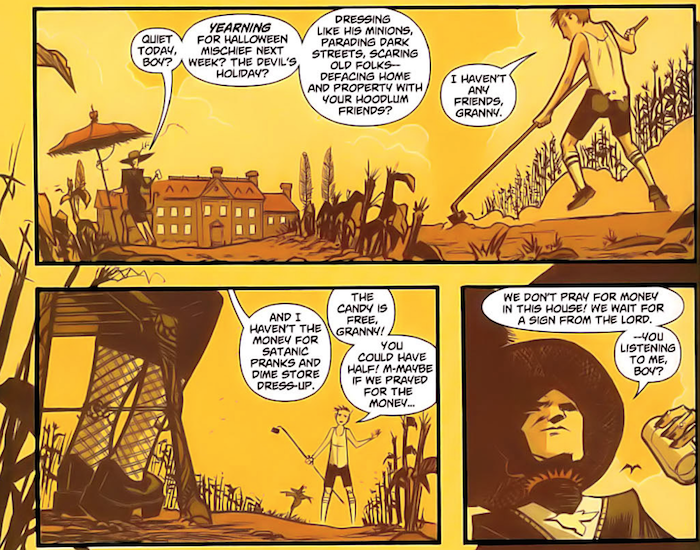 Scarecrow Year One: Jonathan Crane working in the corn fields by her great-grandmother. 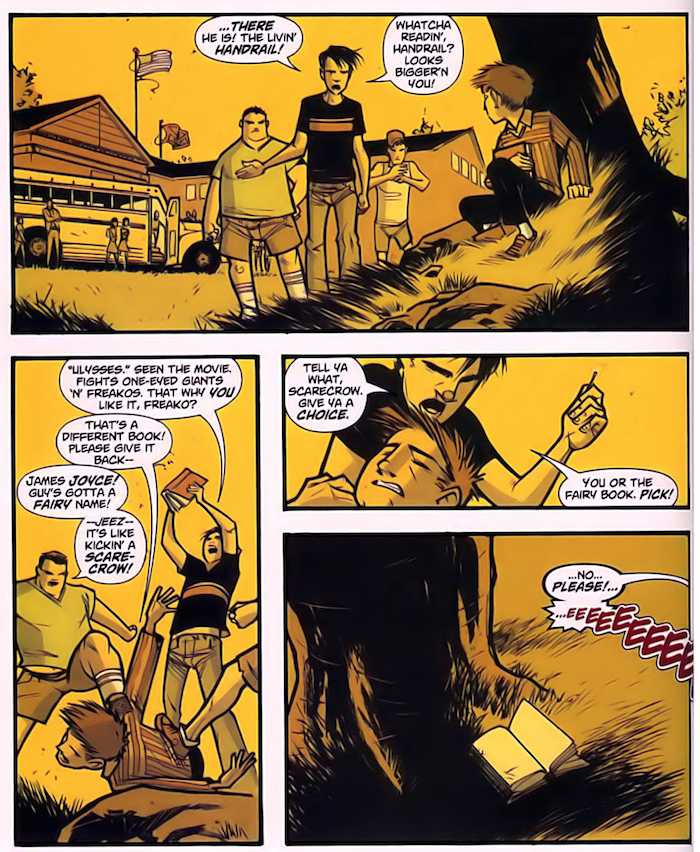 Crane was frequently bullied as a child. 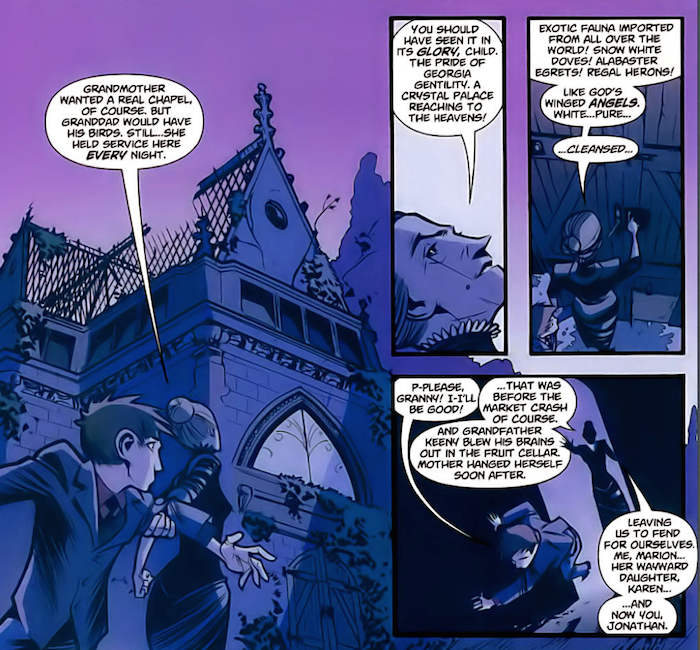 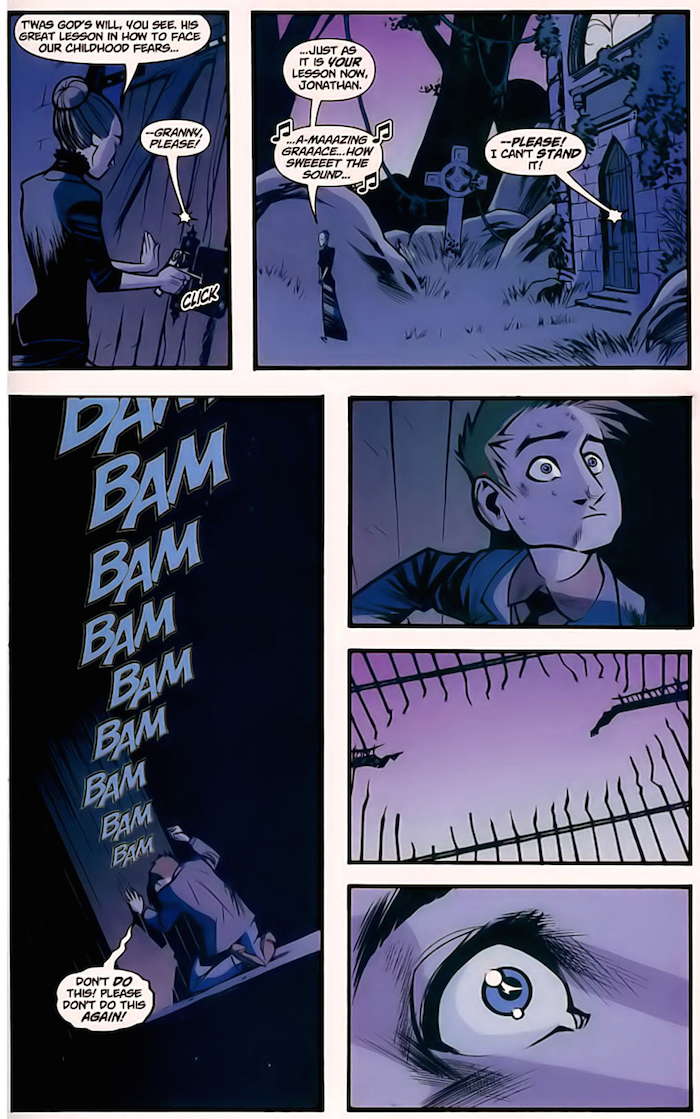 ...and locking him up all night to face the crows 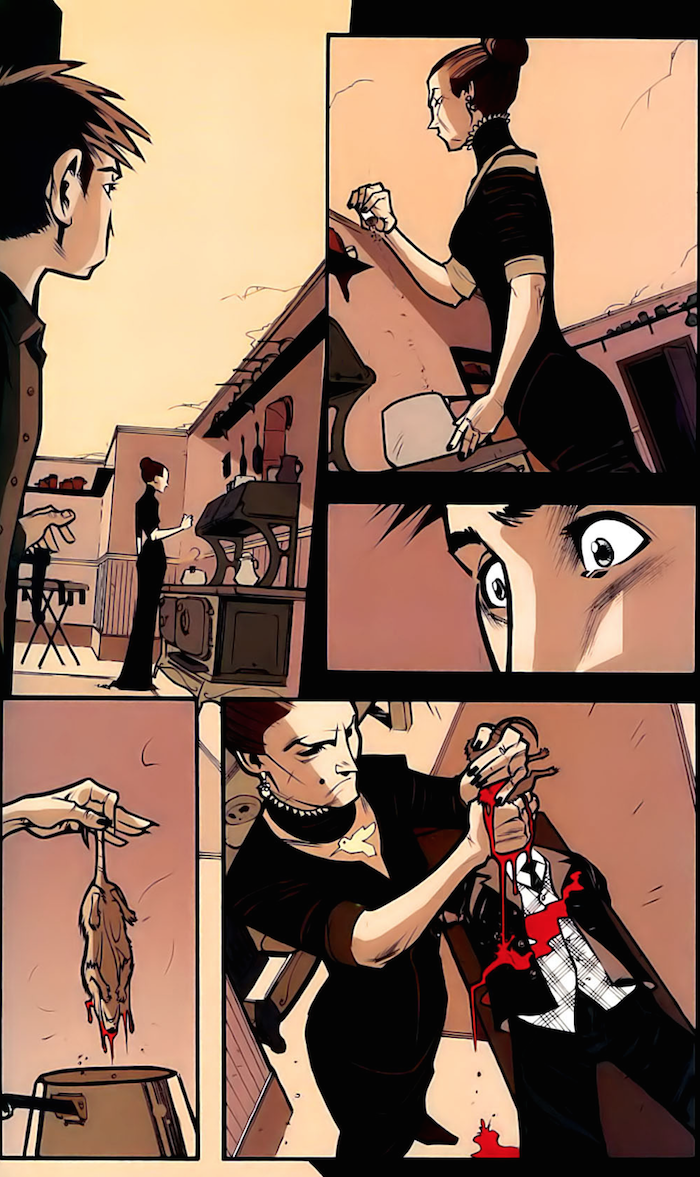 .. who used to get attracted to the suit because of she scented the suit to dead rat juice, herbs and wild fowl pheromones

In High School, he gets further mocked and pranked on due to his lanky frame and studious nature. Apart from Scarecrow, they also called him Ichabod Crane - a character from The Legend of Sleepy Hollow, as they both were similar in appearance. Upon further studying the character used to mock him, he actually felt close to the character, and took up dancing, just like the character did ... which grew into a form of violent dancing and a further study into martial arts (the crane style of Kung-Fu).

One time, after a particularly bad prank was played by him by a couple in high school, he vowed revenge. He dressed up as the name he was tormented by, scarecrow, and attacked the couple, which paralyzed one and killed the other. After high school, he went on to become a star student of psychology and a favorite of his professor, Dr. Bramowitz. He later developed the fear-toxin and used it to dispose off of Dr. Bramowitz and got his position at the university as a professor.

As a professor, he also seemed to have once mentored a young Thomas Elliot, who would later become the villain Hush. The rest of the story is similar to the golden age one, where he gets fired for his dangerous methods, like shooting a gun in a class to prove a point, etc. He vows revenge and goes on his killing spree, sometimes for revenge and sometimes for money.

In the New 52, yet another tweak is given to his backstory. This time it is Crane's father who was abusive, and used to conduct experiments on him. Generally, he would throw Jonathan in a basement and then later collect samples of his sweat for research. One day, while Jonathan was in the basement, his father had a heart attack and passed away. A few days the authorities discovered the body of Jonathan's father, and happen to chance upon the basement and pryed it open - discovering a frightened, hungry and weak Jonathan Crane.

In the TV show Gotham, a similar backstory is shown. Crane's father used to kill people and used the sweat collected in the victim's last moments (when they were most frightened) for research.

Due to a childhood where he was abused, terrified and mocked throughout, he grew up to be an individual with little sympathy for society in general. He also was scared for most of his childhood by most people in his life, so he has an obsession with fear and how to counter it. Crane is extremely intelligent, and is a genuinely gifted researcher into psychiatric drugs and the psychosis of fear. 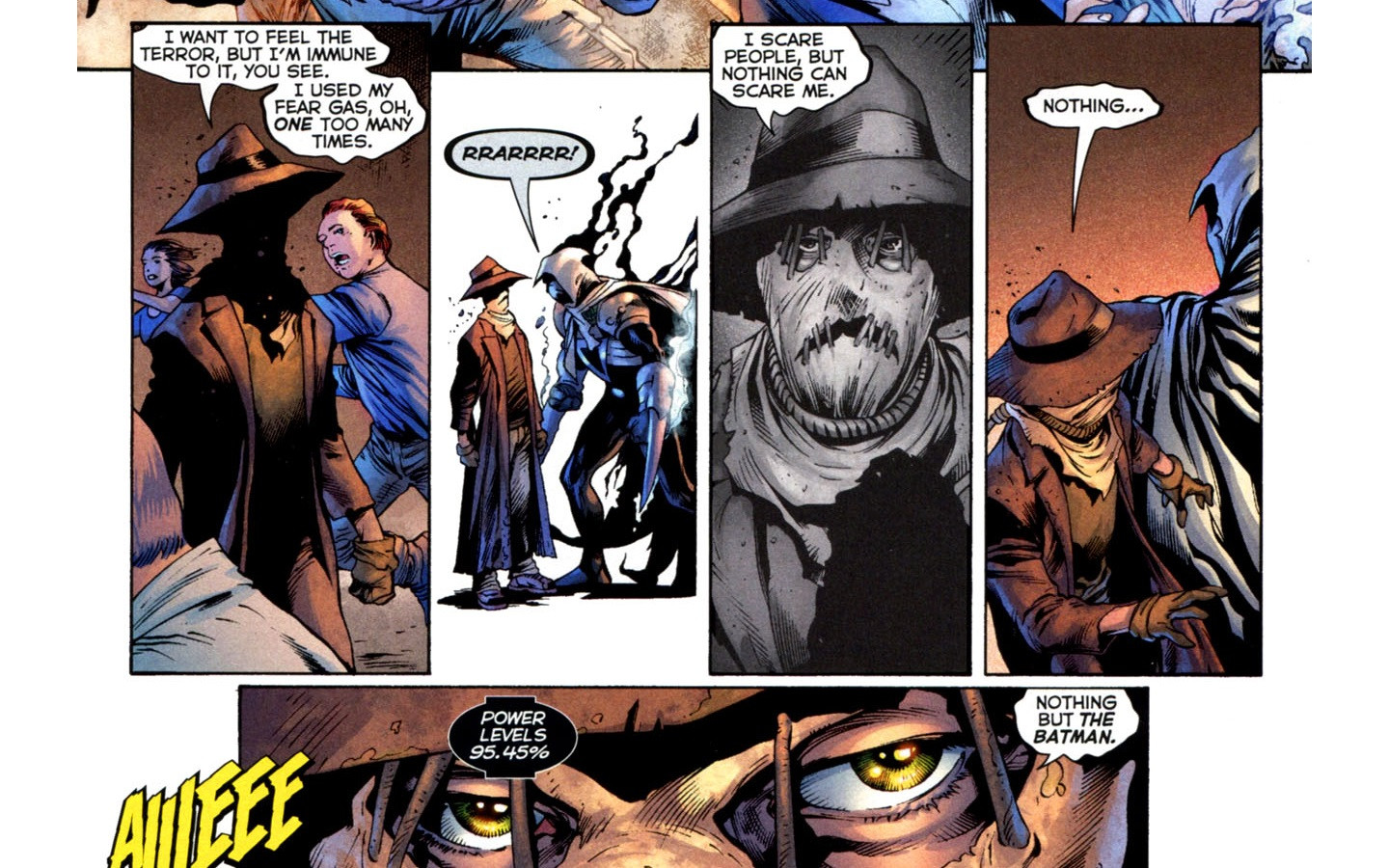 Due to using the fear-toxin so much on himself, in many interpretations he is immune to fear anything except the Batman. However, he also has an addiction to it, and seeks out confrontations with Batman to feed the addiction.

His fear-toxin is a great weapon though, as whoever the scarecrow sprays this toxin on, gets hallucinations of his or her worst fears. He is also a very good martial arts fighter (as mentioned earlier, he learned the Crane school of Kung-Fu) and can hold his own against most people in close quarters combat.

The fear-toxin, if used cleverly, can be used to control the actions of the victim, thereby making it a sort of a mind-control drug. This is a very powerful thing, and together with the intelligence Crane has, along with his martial arts skills, make him one of the most dangerous villains in the Batman universe.

The Scarecrow doesn't have gang of his own, and generally works alone. However, he does from time to time, form alliances with other villains. He made a deal with the penguin to give him a few chemicals in exchange for his help in gassing gotham in the Cycle of Violence storyline. 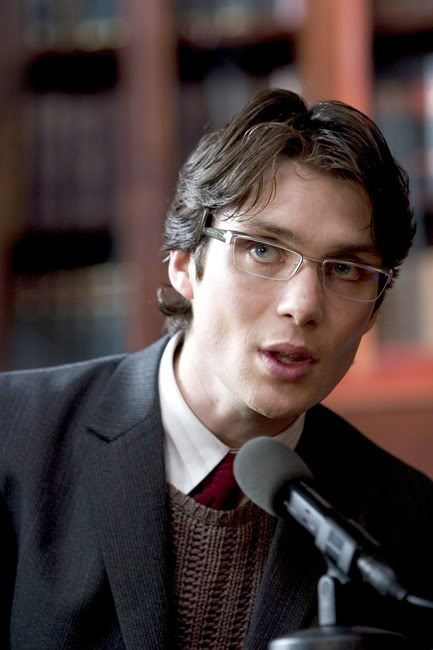 He has been portrayed by Cillian Murphy in the 2005 movie Batman Begins, as well as its sequels, The Dark Knight, and The Dark Knight Rises. Even though his role in the last two movies were small, however he is the only villain to appear in all three of the nolan batman films. 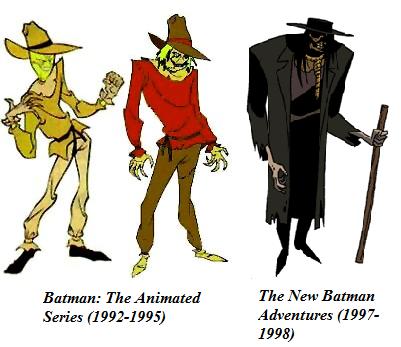 Various depictions of Scarecrow in Batman: The Animated Series and The New Batman Adventures

In the 90s, The Animated Series cartoons for Batman depicted the scarecrow in a few episodes as well. The episodes "Nothing to fear", "Fear of Victory", "Trail", "Dreams of Darkness", and "Lock Up" all features the Scarecrow trying to use his fear-toxin to cause damage in Gotham City.

A teenage version of Jonathan Crane appears in the TV Show Gotham. After his father injects him with a fear serum, he ends up dying with an encounter with the police, leaving Jonathan with hallucinations of a large demonic scarecrow. By the end of the episode "scarecrow", he is left in the hospital still living in seemingly perpetual fear of the scarecrows. 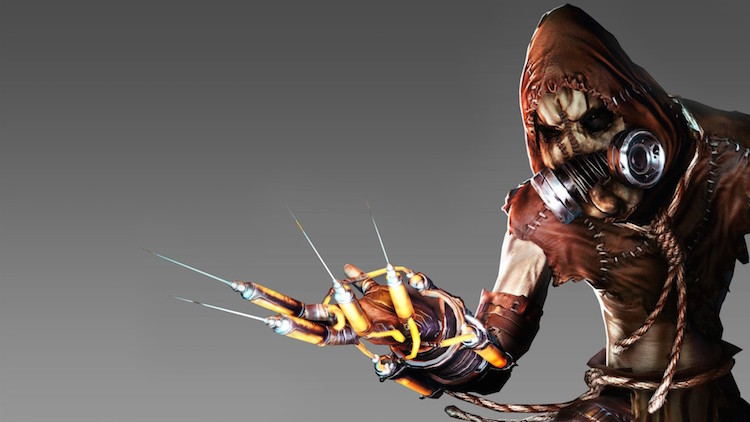 Perhaps the biggest boost in scarecrow's popularity, even more so than the Dark Knight Trilogy, has come from the Arkham games. His appearance and levels in Arkham Asylum was extremely popular among fans. His character was given a rest in Arkham City and Arkham Origins (though there is an easter egg in Arkham City hinting to his upcoming plans to wreak havoc).

In Arkham Knight though, his character is front and center as the main antagonist (along with Arkham Knight) and the mastermind behind the chaos in Gotham. This role is voiced by John Noble in the game, and by all accounts has done a fantastic job in voicing Crane.

Its interesting to note that in Arkham Asylum, the Scarecrow was supposed to have been attacked by Killer Croc, and in Arkham Knight, we see Scarecrow with the scars of that fight. His face has an even more a skeletal like structure, with some of his face peeling or falling off, and (as evident in the Arkham Knight Toy), his left leg also needs braces. So clearly he was heavily injured in that fight, and no doubt that he blames batman for it, fueling his hate for him.